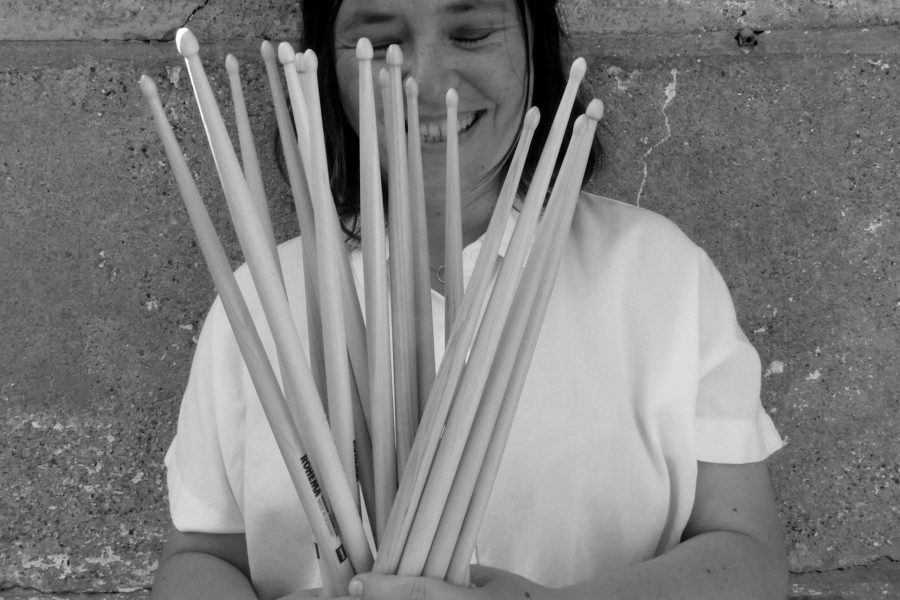 Valentina Magaletti is a drummer-composer and multi-instrumentalist with an inventive approach to drums and percussion. Her versatile technique, which can incorporate anything from vibes and marimba to contact microphones and found objects, results in a style that is forever evolving. Feeling just as comfortable performing behind a delicate ceramic kit as she does hammering out motorik rhythms, her creative take on percussion has resulted in a diverse discography and many interesting collaborations.

As a drummer, Magaletti moves effortlessly between the seemingly disparate worlds of alternative and mainstream music. She has played with artists such as Jandek, Pat Thomas, Deb Googe, Malcolm Mooney, Thurston Moore, Steve Beresford, Steve Shelley, Lafawndah, Mica Levi, Sampha, Kamasi Washington, and Nicolas Jaar to name a few. In addition to collaborating with the gamelan Ensemble Nist-Nah and drummers Malcom Catto, Julian Sartorius and Charles Hayward, she has played with stalwarts of the experimental underground scene like Gnod’s Marlene Ribeiro, Wire’s Graham Lewis, and Thighpaulsandra (Coil). In 2017, Valentina participated in The Can Project, standing in for the late Jaki Liebezeit, at London’s Barbican Centre.

Magaletti’s compositional credits are just as elaborate: with Tom Relleen, she was one half of Tomaga, the critically acclaimed electronic duo; with Al Wootton, she creates irresistible claustrophobic dub as Holy Tongue; with Pino Montecalvo, under the Avvitagalli alias, Valentina improvises intricate sonic collages; alongside percussionist João Pais Filipe, as CZN, she constructs hallucinatory rhythmic worlds, which are as fragile as they are eternal.

While studying drums, early exposure to both prog and bebop styles engendered an appetite for experimentation. With each new project, Valentina is developing fresh nuances and searching for new ways of teasing out sound from her signature instrument. For Magaletti, playing the drums is akin to an unfolding narrative: stories that eschew spoken language in favour of rhythm, pulse, and vibration.

Upcoming projects include an album with Marta Salogni, due in 2023 on Permanent Draft (the new female only editorial and label that Magaletti is starting with her partner), as well as a collaborative release with Zongamin, and a duo with Laila Sakini.

Valentina Magaletti is based in London.