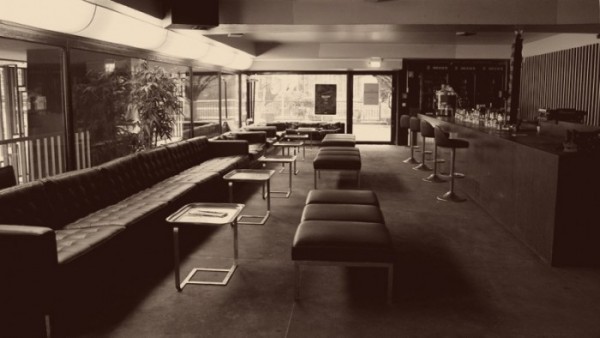 Salon des Amateurs has always been considered as one of the benchmarks in Dusseldorf’s prolific music scene, not just because of the location (the bar is situated in the exhibition hall for contemporary art) or the bohemian name inspired by the ‘Societé des Artistes Français’, but because of his cutting edge approach to music. Opened in 2004 by Tolouse Low Trax, Aron Mehzion and Stefano Brivio, who got to know each other in Kunstakademie, Salons des Amateurs wasn’t meant to be a club in the very beginning and this vision still permeates it even now, aiming to decontextualise electronic music from what is considered it’s dance floor side, whilst preserving a very natural approach to it.

Tolouse Low Trax
Detlef Weinrich is one of the founders of Salons des Amateurs as well as one of its residents, known for his releases under his Tolouse Low Trax moniker on Karaoke Kalk, Apparent Extent or his EP on Themes For Great Cities. Mingling jazz and african music with krautrock to then come back to darker tones, he is also part of the famous german band active since 1994 Kreidler as well as recently joining forces with Viktoria Wehrmeister and Jan Wagner as Toresch.

Vladimir Ivkovic
Vladimir Ivkovic is one of Salons des Amateurs’ residents as well as being know for managing the famous label Desolat Music. Starting to spin records during the Nineties in Belgrade first “house” parties, he has build himself a reputation not because of releases (which he hasn’t) but for his musical selection he is also running his own label, Often, where Tolouse Low Trax’s side project Toresch debuted this year.

Lena Willikens
For the past five years, she has been in charge of long and sweaty Friday night parties at Dusseldorf’s free-spirited club/bar Salon Des Amateurs. She is also a dedicated member of the Comeme records tribe and all its missions: her name is frequently on the label’s party bills and she runs the monthly radio show “Sentimental Flashback” for Radio Comeme. As a DJ, radio broadcaster, producer, and Theremin player, Lena is never committed to one style, all is welcome as long as it is twisted the in a one-of-a- kind way.

Wolf Müller
Jan Schulte started coming to Salons des Amateurs in 2006 to then become one of the venue’s residents and started producing as Wolf Muller, using this moniker to mingle world music and percussion with a weaving of weird drums and releasing on Theme For Great Cities label. Also know as Bufiman on Versatile Records, he recently teamed up with Young Marco as Young Wolf.

Durian Brothers
The Durian Brothers are a trio evolved out of Salons des Amateurs and active since 2009 with a very particular approach to music. Playing prepared Technics turntables, a sequencer and an array of effects, they blend polyrhytmic afro beat percussions with noise-saturated aspects of electronic minimalism, completely avoiding the use of actual records.