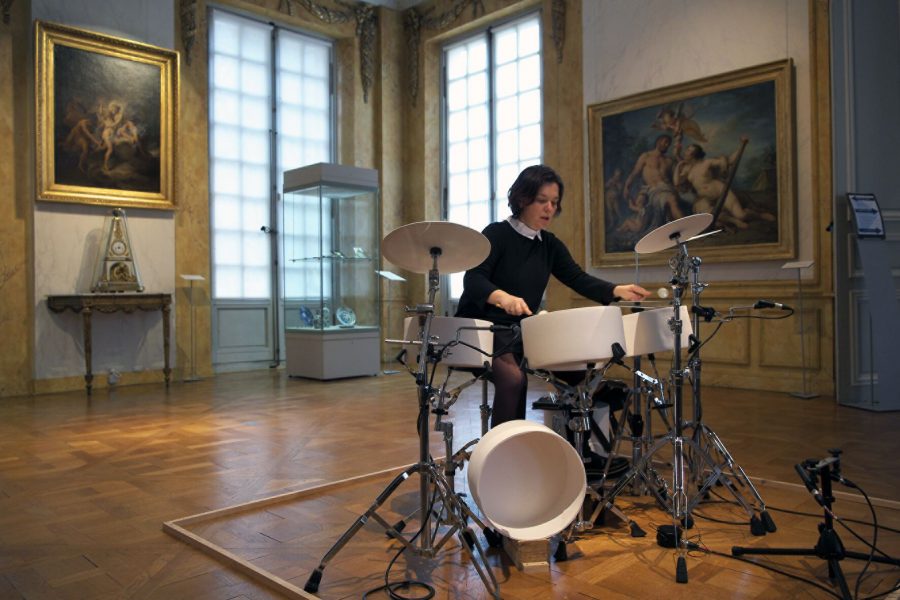 London based Valentina Magaletti, fantastic drummer for Tomaga, Vanishing Twin and many other wonderful collaborations, plays on a sculpture conceived by artist Yves Chaudouët, the Batterie fragile, a drum-kit made out of porcelain.

The Batterie Fragile was conceived by Yves Chaudouët, made out of porcelain under the expertise of Marjorie Thibault, at the Ecole superieure d’art des Pyrenees, Pau-Tarbes in 2016. The Batterie Fragile is part of FRAC Aquitaine Collection, Bordeaux. On March 2017, on the occasion of the Festival Super Flux (Tours, FR), co-organized by Le Temps Machine and Le Petit Faucheux, Yves Chaudouët has been invited to exhibit his Batterie Fragile, a drum kit made out of porcelain, in the museum des Beaux Arts de Tours while Valentina Magaletti, drummer for the duet Tomaga, has been invited for a gig of said band in le Petit Faucheux. The performance was recorded live and later released as a record on Un je ne sais quoi label. There must have been a meeting between Valentina and the Batterie fragile… A new version of the Batterie fragile ready to tour with Valentina is being made. This solo show on an unlikely sounding instrument is as poetic and unique as you may expect.