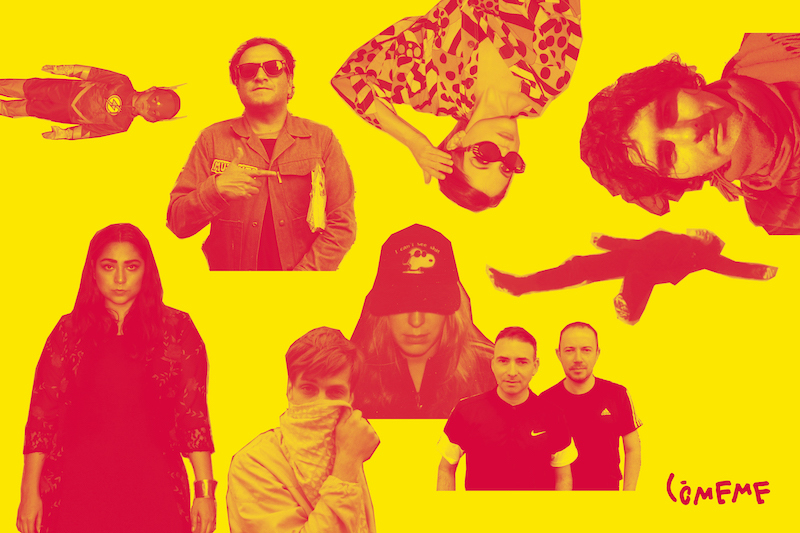 Founded in 2009 the internationalist label Cómeme has established itself as a mobile home, a dance music caravan joined and nurtured by artists from BsAs, Joburg, Medellín, Bucharest, México, Köln and many more places on the planet. Under the direction of Avril Ceballos and Matias Aguayo it has further radicalised its aim to become a place for diversity, irreverence, musical insurgency and freedom

Cómeme is a body of worldwide ritmo lunatic heralds, self-styled electronic primitives that join in for a nightlife fiction to become reality. This collective fantasy is utterly devoted to the dark side of the mirror ball.

Expect the unexpected and don’t expect a traditional label.

Charlotte Bendiks: the northern ambassador of distant intimacy. A DJ, a producer, and a positive thinker, she spent the last years exploring music, people, life, and places. Playful and silly, and therefore confident and sexy, whether as a Dj or playing live, her music is deep, dark, and psychedelic.

From her home town Tromsø, where she ran her own clubseries, actively shaped the Insomnia Festival, and released two records on Mental Overdrive’s Love OD label, to Cologne, where she cooperated with artists like Coma, Lena Willikens, and developed a long-lasting mutual love affair with the Salon des Amateurs.

Sano: Born in the mountains of Colombia and now resident in the streets of Barcelona, SANO is a DJ and music producer that grew up in the early underground music scene of Medellín and took part in the Cómeme action all over the world in 2011. His inspiration comes from street sounds in a deep relation with rawness and mysticism which combined define his own sound.

Christian S: As a DJ who traveled the world and played from Russia to USA, from Tiflis to Tromsø, Christian S likes to create a jacking room where all misfits of the night can be free to be who they are. And this with a rhythmic narrative, in which each record works like a new paragraph in a sensual story that intends to engage all dancers to express themselves.Since the break of the millennium Christian S also started to bring his own music to life. With his productions for Cómeme he enthralled music lovers with a deep danceable musicality. Tunes like “Jagos” or “The Power Of Now” became Cómeme signature tracks and his remix works for artists like Little Dragon, Colder or DJs Pareja proofed his sensitivity towards others peoples emotions. Just recently he embarked with an EP on the Munich based label Permanent Vacation, that thrills with straight forward, yet gentle club vibes mesmerizing between house and techno. Soundcloud / IG